The Vietnamese trust the media the most

The COVID-19 outbreak has proven itself something of a poison chalice for global media outlets with some enjoying booming audience numbers while others are struggling to stay in business due to a collapse in advertising revenue. Most notably perhaps, the situation has created even greater challenges for journalists as they attempt to distinguish fact from fiction in a 21st century digital media ecosystem plagued by disinformation. Whether its reporting on the reality of COVID-19 in overcrowded hospitals or interpreting President Trump’s suggestion that disinfectant could be used to treat the virus, the media’s credibility has arguably never been more crucial.

Given the importance of accurate reporting about COVID-19, YouGov conducted a poll to see where trust in coronavirus coverage is highest and lowest. Vietnam’s efforts to halt the spread of the disease have proven immensely successful (it only had 320 cases and no deaths as of May 20) and 90 percent of Vietnamese respondents said they trust the country’s coverage of the pandemic. That high figure is likely linked to the country’s harsh and unforgiving media landscape however as Vietnam’s press is tightly controlled by the ruling Communist Party. The country has consistently ranked among the worst nations the World Press Freedom Index from Freedom House for years.

China’s coronavirus reporting has come under intense international scrutiny amid allegations Beijing initially downplayed the severity of the outbreak in Wuhan, particularly the true death toll. Like Vietnam, its press is tightly controlled by the authorities and 62 percent of the public trust the Chinese media’s accuracy about COVID-19, according to YouGov. Things are far more mixed where the free press reigns, though the use of that term has been undermined by some world leader’s consistent attacks on journalists. In Germany, 54 percent of those polled trust the media’s reporting about the pandemic compared to 50 percent in Spain, 38 percent in Italy and just 26 percent in France.

There is a distinct lack of trust in COVID-19 reporting in the UK which is hardly surprising given that the country, and its media in particular, remain bitterly divided by Brexit. The situation hasn’t been helped by the UK’s handling of the coronavirus pandemic which has resulted in 250,000 confirmed cases and over 35,000 deaths as of May 20 which has seen a mere 31 percent of people trust COVID-19 coverage. In a similar fashion, levels of division are only increasing in the U.S. amid President Trump’s consistent attacks on the “lamestream media” and “fake news”. Despite that, Americans still have a higher level of trust in COVID-19 reporting than people in the UK at 42 percent. 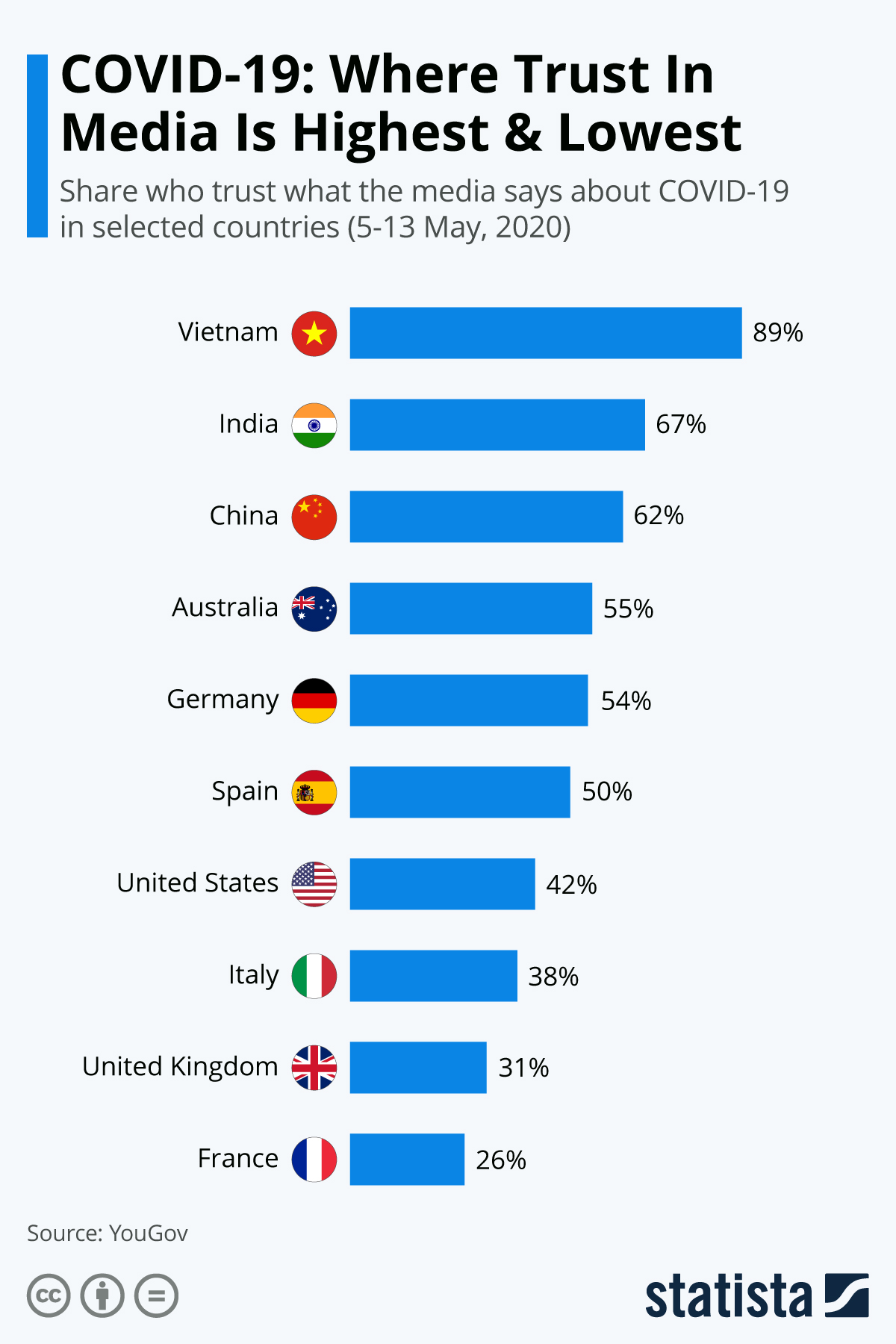