Minor explains why he did it

The story of a Romanian minor who decided to desert the material world and become an Orthodox Christian monk on Mount Athos in Macedonia, Greece, has raised some eyebrows, and serious questions as to how legal it is for an underaged boy to leave his parents and make such a life-altering decision. The story of 12-year-old Michalis (Perlea) was covered in magazine “Luma Credintei). The boy was born to Romanian parents on the island of Crete and moved to Rome, where he lived with his parents and three siblings, who are all younger up until he decided to frock himself in the monk’s garbs. From the age of 5 Michalis would help the bishop of Italy Siluan in the Church liturgy and his spark to serve God as a hermit lit up once he came across some Athonite monks from John the Baptist’s Skete. “Mother Virgin comforts me and my nostalgia for her (his mother) wanes”, he answered to whether he missed his mother. “I am learning Greek, seven hours a day. Then I will go on to high school lessons”, he said. “I must learn Greek at all costs”, he added. On the question of whether his parents had urged him to come to Mount Athos, he was clear and said it was his idea. “Father Gerasimos told me about Athos and I decided to come”, he claimed. 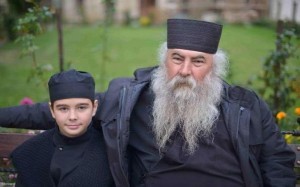 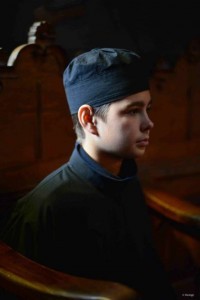 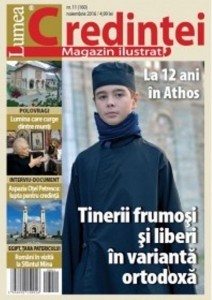