Many gathered despite draconian security measures

Thousands of protesters have gathered to rally for the name of Macedonia and the Greek government’s Prsepes agreement with FYROM in Thessaloniki on Saturday, despite the draconian security measures both at the city’s iconic landmark the White Tower and the statue of Alexander the Great.

Meanwhile, in separate marches against the Greek government people are expressing their opposition on a series of issues., with the Greek Communist party trade union PAME marching by itself again.

Waving Greek flags and banners with messages such as “Macedonia, Hellenic land” and despite the strict security measures, the rails and barricades set up the SWAT police vehicles, citizens from Thessaloniki and other cities in Northern Greece, voiced their opinion about the “Greekness” of Macedonia in a gathering that will have no speeches, but only songs and slogans.

The police have implemented draconian security measures with barriers and roadblocks in order to prevent access to the Vellidion Conference centre where PM Alexis Tsipras is expected to speak. 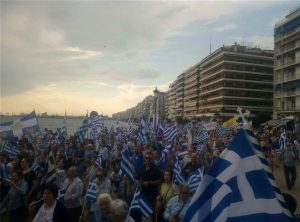 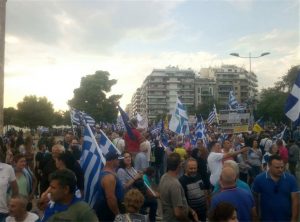 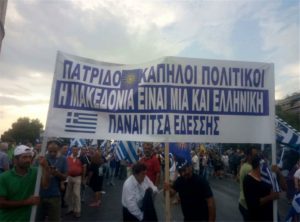 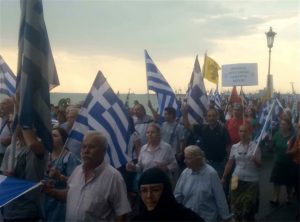