A 3.4 magnitude earthquake on the Richter scale shook the island of Karpathos, the second largest of the Dodecanese in the southern Aegean Sea. The tremor, which struck at 9.54 pm, was located 24km northwest of the island and a had a depth of 12km. The quake was felt in many areas. 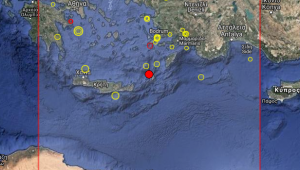