Mars is a planet of vast contrasts — huge volcanoes, deep canyons, and craters that may or may not host running water. It will be an amazing location for future tourists to explore, once we put the first Red Planet colonies into motion. The landing sites for these future missions will likely need to be flat plains for safety and practical reasons, but perhaps they could land within a few days’ drive of some more interesting geology. Here are some locations that future Martians could visit. 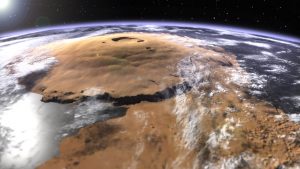 Olympus Mons is the most extreme volcano in the solar system. Located in the Tharsis volcanic region, it’s about the same size as the state of Arizona, according to NASA. Its height of 16 miles (25 kilometers) makes it nearly three times the height of Earth’s Mount Everest, which is about 5.5 miles (8.9 km) high.

Olympus Mons is a gigantic shield volcano, which was formed after lava slowly crawled down its slopes. This means that the mountain is probably easy for future explorers to climb, as its average slope is only 5 percent. At its summit is a spectacular depression some 53 miles (85 km) wide, formed by magma chambers that lost lava (likely during an eruption) and collapsed.