A document with the signature of Theodoros Kolokotronis, the leader of the Greek uprising again the Ottoman Turks in 1821, is among the more than 530 rare books, documents, manuscripts, photographs and engravings that are scheduled to go up for sale at Vergos auction on Thursday, March 14th.

According to the announcement issued by the auction company some of the most noteworthy items include:
– A handwritten account of the participation of the Ioannites in the Morosini campaign with the fate of eight ships under J. J. von Herberstein (1686-1687).
– The oath of Th. Kolokotronis and the members of the Peloponnesian Senate to act in unison to save the homeland and to leave aside their personal interests, signed in a document with their signatures (16 October 1822). 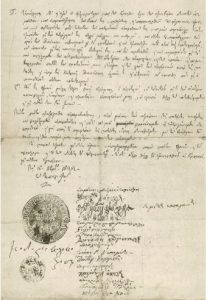 – A copy of “Aya Sofia, Constantinople” (London 1852), with 25 lithographs engraved by architect G. Fossati, who organised the restoration work of the 1847-1849 monument.