In the final moments of its 27-year mission, spacecraft Cassini took one final look at one of Saturn’s unsolved mysteries.

“Peggy” is a glitch that appears to be a disturbance in Saturn’s rings. 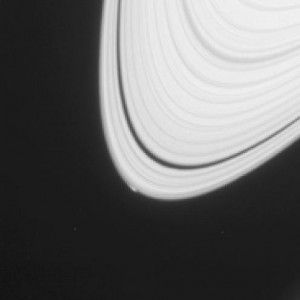 Discovered in 2013 by astronomer Carl Murray of Queen Mary University, London, (and named after his mother in law) the phenomena ‘Peggy’ appears as a ripple on the ‘A ring’ of Saturn.

Small satellites known as ‘shepherd moons’ or ‘moonlets’ that dwell with the rings, which create waves, have previously been identified, but Peggy was not one of them.

Murray found waves that appeared to have no shepherd moon source. Scouring images captured by Cassini, he found a cloud of debris that could be the source of the glitch. 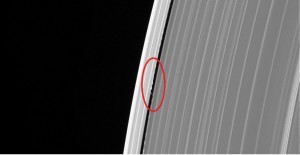 The informally named debris, according to NASA, is estimated to be more than about half a mile in diameter.

The space agency also theorises that Peggy could be a moon at one stage of composition or decomposition.

A moon forming or disintegrating, or it may not truly be a moon at all.

Could Cassini have found a glitch in the Matrix?

We’ve never actually resolved the object, all we can do is track the glitch.

On September 15, the day of Cassini’s ultimate descent, it sent back to Earth another image of Peggy.

According to Murray, the tiny dot seen in the ‘Keeler gap’ of the A ring is the much larger, but further away, moon of Daphne.

The ripples around it however are thought to be Peggy. 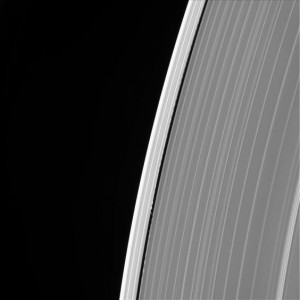 Peggy was one of the final six images of the Saturn system taken by Cassini.