She met mere mortals with and without the Vatican’s approval

The divine is supernatural, but religion is very much of this world. The way people worship even has an impact on their physical surroundings. Here’s a telltale sign that you’re in Catholic country: chapels, shrines and grottoes dot the roadside. The latter are replicas of the cave in southern France where the Virgin Mary appeared to a local peasant girl in the early 19th century.

Those Marian apparitions themselves are another peculiar point of contact between faith and the world. Typically, they happen in times of crisis to young children from a humble background. They are often the only ones able to see the apparition. The visitations sometimes reoccur over a prolonged period. If the Virgin speaks to those who can observe her, it is to ask for a chapel or church to be built, to implore the faithful to be more devout, and/or to offer warnings for the future. Witnesses are often able to report in great detail on the dress and attributes of the apparition, but mostly there is no direct contact between the Virgin and the observers. 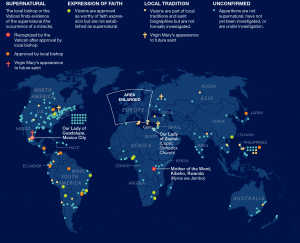 What is a Marian apparition?

Marian apparitions are generally associated with Catholicism, which has great devotion for Mary, the mother of Jesus. Despite her being the mother of Christ, the church does not consider Mary to be divine herself. According to Catholic doctrine, the age of public revelation ended when John, the last apostle, died around the year 100 AD. Marian apparitions therefore are ‘private revelations’, illuminating aspects of faith but never revealing new ones. 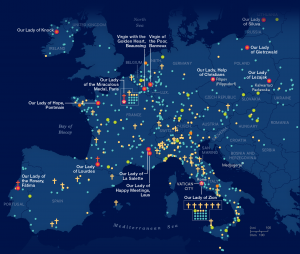