The University of Chicago’s Air Quality Life Index was published on Monday and it found that air pollution is the world’s top killer. Particulate pollution exceeding WHO guidelines is causing the average person worldwide to lose 1.8 years of life expectancy. Putting that in perspective, it is worse than first-hand cigarette smoke, alcohol, HIV/AIDS and conflict.

The researchers state that if the current state of particulate pollution persists, the global population will lose a total of 12.8 billion years of life. Of course, some areas are suffering more than others and in some parts of India, people could lose up to 11 years of life expectancy due to inhaling polluted air. China and India are also badly impacted by the problem with their life expectancy cut by seven years and five and a half years respectively.

The average loss in life expectancy increased from 1.0 in 1998 to 1.8 in 2016 with developing countries across Africa and Asia primarily experiencing increases in air pollution. The problem is growing worse due to a lack of action with only a handful of India’s 100 most polluted cities developing strategies to mitigate it. The situation is better in Europe where effective policies are helping cities attain cleaner air. Someone in the U.S. or UK loses about one month of life due to particulate pollution, far less than in the developing world. 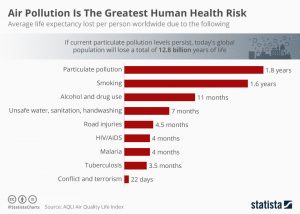