Airbus on Tuesday unveiled a curvaceous aircraft design that blends wing and body, designed to slash carbon emissions by some 20%.

The European planemaker has been carrying out flight tests of a 3.2-meters-wide (10.5 feet) technology demonstrator, code-named Maveric, at a secret location in central France since last year. It lifted the veil on the design at the Singapore Airshow. 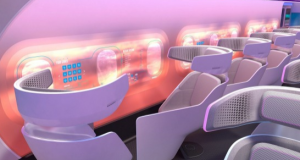 The concept of a “blended wing body” design has been around since the 1940s and led to the U.S. B-2 bomber, as well as the X-48 research project between Boeing and NASA a decade ago.

Such aircraft are complex to control but produce less aerodynamic drag, making them more efficient to fly.

Planemakers are revisiting such designs as the passenger jet industry tries to commit to more environmentally friendly aircraft. 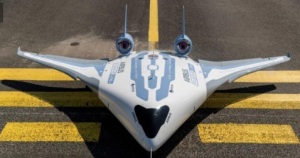 “We believe it is high time now to push this technology further and study what it brings to us,” Jean-Brice Dumont, executive vice-president of engineering at Airbus, told reporters. “We need these disruptive technologies to meet our environmental challenge. It is the next generation of aircraft; we are studying an option”.