The, by now well-known, Albanian extreme nationalist Tahir Veliu and his minions targets Albania’s Archbishop Anastasios for the first time and demands from the official authorities to expel him from the Albanian territory as an undesirable person!

The extreme nationalist Tahir Veliu’s group proceeded in yet another unprecedented provocation against the Greek Minority in Albania, with the Albanian state turning a blind eye once again.

In his post on facebook, Tahir Veliu posted a photo of Archbishop Anastasios with a large red “X” on it. 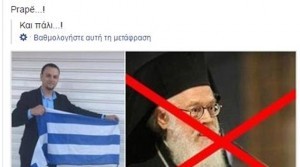 Veliu in the text accompanying the photo, demands from the Albanian state to call him a persona non grata, as he says he has…“violently” seized his position as the Albanian Archbishop and preserves it with the purpose of reviving the Greek chauvinistic plans.

At the same time, Veliu blames Anastasios for “Hellenization” of the south of Albania, an area inhabited by Greeks for many centuries non-stop. 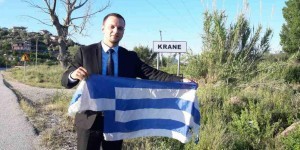 It is worth noting that lately the Albanian nationalist has increased the number of provocative actions against the Greek Minority of Northern Epirus (southern Albania) by even going around in the minority villages terrorizing the indigenous population. In several villages, such as Moursi, Livadia, Alyko, Krania etc., he took down the Greek flags and desecrated them. He was also filming his provocations and posted them on the social media bragging about them.

The new provocations generated an outcry and the reaction of “Omonia”, the Greek Minority’s National Organization, which, in a statement, denounced both his actions and the provocative indifference of the Albanian authorities.