Bleona showed off her breast!

Every star is vying for the most red carpet attention on the hottest night in Hollywood’s calendar.
And Albanian singer Bleona Qereti was making a concerted effort to catch the eye as she stormed the red carpet at the annual Vanity Fair Oscars bash held after the 90th Annual Academy Awards at the Dolby Theater on Sunday evening.
The 38-year-old left nothing to the imagination as she sported an entirely sheer gown which displayed the entirety of her assets while also rocking high-waisted knickers to protect part of her modesty.
Bleona looked stunning for her turn at the glitzy bash, yet no eyes were on her face as she showed off her entire chest under the sheer dress.
Adding to the statement look was the dazzling adornments all over the gown, which was floor-sweeping in length and boasted a huge belt to cinch in her tiny waist.
To maintain her modesty, the stunner sported gold nipple pasties which drew the eye further to her eye-popping assets.
Boosting her endless legs were a pair of staggering Christian Louboutin heels which added a touch of designer chic to the scanty ensemble. 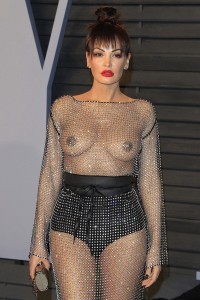 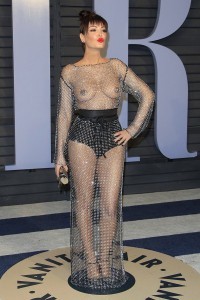 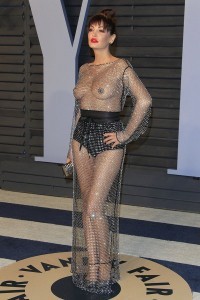