Fast radio bursts (FRB) were first discovered in 2007 at Parkes Observatory in Australia, with several dozen or so detected since

There are plenty of strange phenomena lurking in the universe, and fast radio bursts are among the more mysterious. So named for their less-than-5-millisecond duration, the source of these intense, high-energy light bursts continues to elude scientists. Now researchers from the Harvard-Smithsonian Center for Astrophysics are proposing they could have “an artificial origin,” specifically from planet-sized alien transmitters for powering interstellar spacecraft. 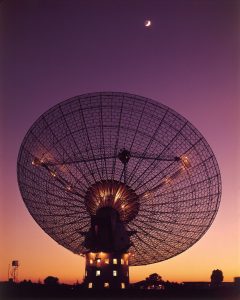 Fast radio bursts (FRB) were first discovered in 2007 at Parkes Observatory in Australia, with several dozen or so detected since. The initial discoveries showed FRB to be seemingly random one-off events coming from distant galaxies, leading some to hypothesize they were the result of cataclysmic cosmic events, like the merging of black holes or a massive supernova.

But in 2015, an astronomer from McGill University found 11 bursts that not only originated from the same location in space, but were repeating. More repeating FRB were discovered in 2016, which were tracked to a dim dwarf galaxy 3 billion light-years away, poking holes in the cosmic cataclysm idea. 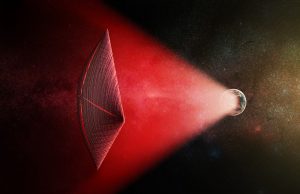 With no consensus on the source of these puzzling phenomena, Avi Loeb and Manasvi Lingam from the Harvard-Smithsonian Center have offered another possibility: advanced alien technology in the form of a solar-powered radio transmitter. These beams of light, they say, could be used to power giant light sails in a “photonic propulsion” system, transporting spaceships or probes through interstellar space that approach the speed of light.