An explosion of interest by foreign investors on the island

There is something about arriving by ferry at a picturesque Greek port that makes you feel immediately relaxed. Reaching Skopelos, a lush island part of the Sporades cluster in the western Aegean, was no exception. The island where “Mama Mia”, one of the most successful and highest grossing Hollywood movies was shot, is rapidly becoming a paradise for property investors.
It is quite the contrast for travelers disembarking the old “Proteus” ferry of a different era with its worn upholstery in the sitting lounge, and bygone decor, as they enter the newly built five-star boutique hotel “Natura” at the island’s harbour with state of the art facilities. 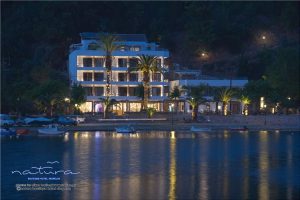 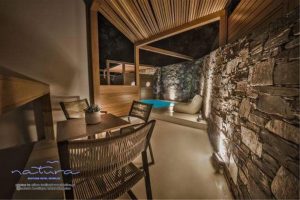 Upon arriving at the reception of “Natura”, you immediately know that some serious money has gone into the project, as you check automatically via your smart mobile phone or device with the application “Ilumio”. You tap the screen at the door of the room and it opens automatically, the temperature is at the points you have selected and on the TV remote control, there is a button that connects you to Netflix.

The construction of the specific hotel cost around 2 million euros. It offers 900-euro suites per night private pools and a “Batmobile” boat that whizzes you to Loutraki from Skiathos in a crazy 10 minutes. They are signs that great things are happening on the island.

A beer at the “Steki tou Mastora” is the perfect spot to sit down and get some inside info on who is buying what, where. That’s where we found out that an Italian investor had been purchasing land plots on the island. He is just one of many foreigners who was drawn to the beauties of the island and decided to explore the opportunities.

Another one, a big shot Romanian lawyer purchased a seaside plot in Armenopetra for 500,000 euros with the construction of his villa exceeding 4 million euros. 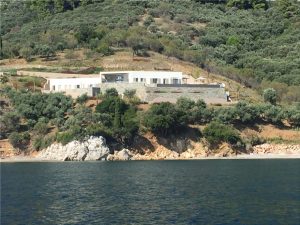 Nothing, however, compares to a property that recently changed hands. A Dutch businessman had for a long time set his eyes on a shack located on the Bloh coastline. He forked out a cool 1 million euros (!) to become the owner of a shack! After hard bazaars. He intends to demolish the shack and build a holiday house, costing more than 1.5 million euros.
A Dutchman paid 1 million euros for this abandoned beachfront residence in Bloh 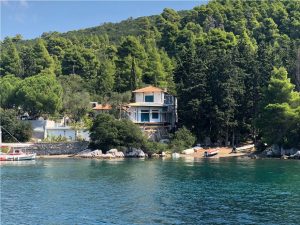 In Loutraki Skopelos, an American entrepreneur and major shareholder in Nike recently bought 18 acres for 1 million euros and plans to build two villas, 500 square meters each, with the total investment amounting to 7 million euros.

Skopelos is still an untapped paradise, and despite the fact that the biggest part of the first “Mamma Mia” was shot on its enchanting beaches, the locals did not manage to reap the benefit of the global exposure.

In fact, the slow-moving and cumbersome Greek state, mired in red tape forced the producers of the movie’s sequel of Mama Mia to choose Croatia, instead. 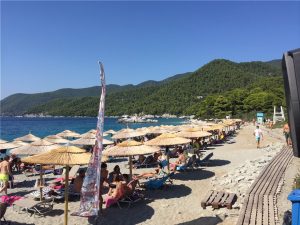 The Greek islands are a top tourist destination, but the most popular ones like Mykonos and Santorini are showing signs of saturation, leading foreign investors to turn to other places, such as Paros, Naxos and now Skopelos for new investment openings with property agents projecting their prices will be skyrocket 5 years down the road.