After a ruthless and exhausting 6 years of war in Syria, only the most ideologically strong militias have managed to flourish, absorbing various fragmented rebel factions and uniting them under strict philosophies. On the frontlines of Raqqa, a battle is raging between the American-backed coalition of Kurdish and Arab fighters known as the Syrian Democratic Forces (SDF) and the Islamic State (ISIS).

The warring creeds could not be any more different. One seeks a decentralized, secular, grassroots version of democracy, while the other seeks a radical interpretation of an Islamic State. Yet, on both sides, soldiers dream of establishing their own version of Utopia, ideologically shaping the world beneath their feet. Bullets in the air take on a dual meaning- seeking to render useless the physical bodies of enemies, but at the same time those bullets hurl towards the others’ ideals. Each side describes the land as “liberated” when the other side fails. 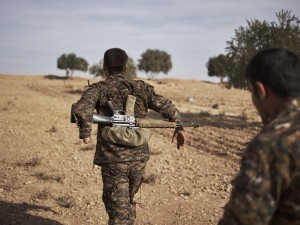 For over 8 months, international journalists and photographers have been blocked from entering the regions of Northern Syria controlled by the SDF due to a strict embargo enforced by all surrounding countries. Despite challenges I am unable to describe here, I was able to gain access and embed with Rojda Felat- the General Commander of the SDF’s “Wrath of the Euphrates” campaign to isolate and surround the city of Raqqa, capital of ISIS’ self-proclaimed caliphate. At the time of writing, the SDF are less than 10 kilometers from the outskirts of the city itself. 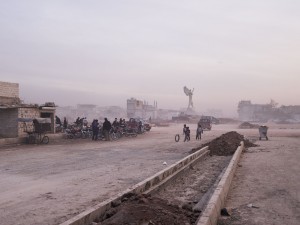 Kobane
My journey began in Kobane- a city of anomalies. To understand the new battle for Raqqa, we must first understand the significance of what happened here.

Nestled along the Turkish – Syrian border, Kobane was a quiet, predominately Kurdish city before ISIS propaganda filled our news cycle. In July of 2012, the Syrian Arab Army abandoned Kobane and other Kurdish enclaves of Syria to dedicate their dwindling resources to other areas of the country in conflict with both a rebellion and jihadist insurgency. Kurds were now free of the repressive nature of the Assad regime, but at the same time, they were left on their own to defend themselves from the Al Qaeda linked groups ravaging the country. 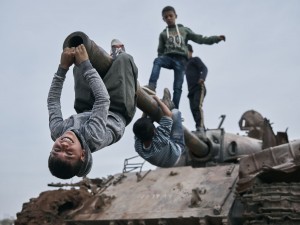 Political dissidents in exile returned home to reorganize the fractured society. Weapons were gathered on the black market. Kurdish guerrilla fighters with decades of experience fighting Turkey’s well-equipped military also returned home to Syria from their bases in Iraq’s Qandil Mountains. They became the commanders of a ragtag mix of local volunteers, and shaped the movement under their ideological leader, Abdullah Öcalan. These guerrillas had previously fought for autonomy and minority rights in Kurdish regions of Turkey but were unable to succeed. The power vacuum that emerged in Syrian Kurdistan presented a new opportunity to influence the tide of the war. Thus was born the Kurdish defense units known as the People’s Protections Units (YPG) and the Women’s Protection Units (YPJ)- perhaps the world’s first all-female army. Other spectrums of Kurdish political voices either abandoned the region and fled across the border, or were forced out by the domination of the new power structure. 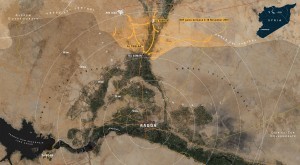 ISIS, with its ego inflated due to sweeping recent victories across both Syria and Iraq, launched a devastating campaign on the city of Kobane in October 2014. ISIS too had absorbed a patchwork of militias and rebel groups under its black flag, as well as thousands of foreign fighters who took advantage of Turkey’s porous border with Syria to join its ranks. Other predominately Arab rebel groups refused to collaborate with the extremists, and joined the Kurds in defending Kobane- the start of what would make up the core of the future SDF alliance.

With the Turkish border now at their back, the defenders of Kobane were cornered into just a few neighborhoods as ISIS pounded their positions with advanced weaponry and looted tanks. Rather than intervening, the Turkish military sat and watched from its border. The Turkish government knew that if the YPG/J were to be victorious, their own repressed Kurdish population could be inspired to make similar demands for autonomy, or worse, rekindle the same armed struggle that had wrecked havoc for decades. ISIS had become a convenient proxy force for Turkey, capable of destroying the ambitions of their old Kurdish enemies. 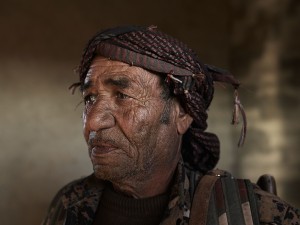 Not every person seeking to protect Kobane held a weapon. Across the border in Turkey, civilians accused their government of aiding ISIS in the fight, and unleashed unrest in the shape of both protests and violent riots. Volunteers held hands to create a lengthy human-chain to prevent the smuggling of fighters and weapons to the ISIS campaign.

Scenes of the battle filmed by journalists with telephoto lenses from the safety of the Turkish border dominated televisions around the globe and social media. It was an easy media spectacle, presented as a fight between the jihadist force that had recently committed genocide versus an oversimplified version of the YPG and YPJ, with its controversial roots largely ignored. 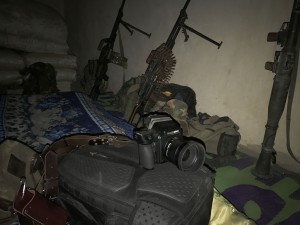 Much to Turkish President Erdoğan’s dismay, President Obama authorized airstrikes to support this unlikely new ally in Kobane. Anti-interventionists in the West had their beliefs challenged as they watched the brave women of the YPJ suffer heavy losses fighting a brutal enemy that a previous intervention itself had helped manifest. In another paradox, the YPG and YPJ, with its Öcalan-inspired anti-capitalist theory, benefitted significantly from American airpower paid for by the US tax dollar. 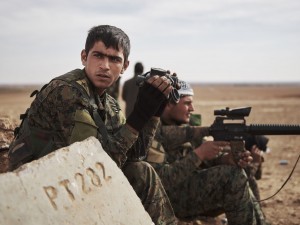 Against all odds, the YPG, YPJ and their rebel allies eventually declared victory over the city. They had proved to the world for the first time that ISIS wasn’t the unstoppable boogeyman its propaganda had suggested. However, the achievement came at great cost of human life and infrastructure.