A huge victory for Panathinaikos, the third consecutive and the second in an away game.

The player that took the Greek team by the hand and led it all the way to this amazing win was Nick Calathes, with 29 points, 9 rebounds, 10 assists.

Panathinaikos, however, had a guardian-angel at the end: James Gist. In the very last second he blocked a shot that could have changed the result of the game! 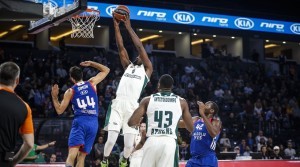