An international team of archaeologists believes it is on the cusp of pinpointing the location of a secret room hidden within the Great Pyramid of Giza as it uses cutting-edge laser technology to map the 4,500-year-old ancient Egyptian wonder.

Medhi Tayoubi, president of the Heritage Innovation Preservation Institute heading the ScanPyramids project, said that the team, which uses infrared thermography to map subatomic particles, had confirmed there was a hidden room inside the structure. Now the archaeologists need to find its exact location. We know there is a secret room, but not where it is,” Tayoubi said according to the Italian newspaper La Stampa.

However, other archaeologists collaborating on the project are being more cautious in their projections. Egypt’s former Minister of Antiquities Zahi Hawass characterized what had been discovered thus far as “anomalies” or “small voids” between the stones.

In October 2016, the group announced their discovery of a previously undiscovered cavity 105 meters high in a northeastern section of the pyramid. It was hoped the discovery would be a corridor. 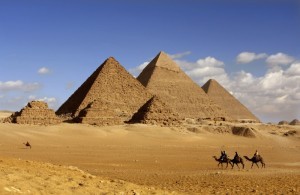 The Great Pyramid is also known as the Pyramid of Khufu, for the fourth dynasty pharaoh who built it between 2580–2560 B.C. The tourist attraction has a rich and storied history of adventurer-explorers searching for elusive Pharaonic treasure inside, using methods less sensitive than lasers. In 820 A.D., the caliph al-Ma’mun began digging tunnels into the walls of the mammoth structure in search of its secrets. The British and Italian 19th-century Egyptologists Richard Vyse and Giovanni Battista Caviglia blasted holes in the pyramid with dynamite.

“Just like X-rays pass through our bodies, allowing us to visualize our skeleton, these elementary particles, weighing around 200 times more than electrons, can very easily pass through any structure, even large and thick rocks such as mountains,” Tayoubi told Discovery News in 2015 when describing the 21st-century techniques being used at Giza.

It is hoped the success of the new technology will lead to further discoveries. British Egyptologist Nicholas Reeves believes the remains of 14th-century-B.C. Egyptian queen Nefertiti were hidden in a secret chamber in the tomb of Tutankhamun. A team from Politecnico University in Turin, Italy, will use methods used in medical scans, creating magnetic fields to investigate the site in the Valley of the Kings once again.