An ancient Egyptian papyrus with an image showing two bird-like creatures, possibly with a penis connecting them, has been deciphered, revealing a magic spell of love.

“The most striking feature of [the papyrus] is its image,” wrote Korshi Dosoo, a lecturer at the University of Strasbourg in France, who published the papyrus recently in the Journal of Coptic Studies.

Dosoo estimates that it dates back around 1,300 years, to a time when Christianity was widely practiced in Egypt.

In the image, the winged creature on the left seems to be poking its beak into the open beak of its counterpart on the right — which also seems to have a nail through its head. A person’s outstretched arms surround the creatures.

Both creatures are connected through what Dosoo said could be chains, bonds or a penis. The creature on the right has two ears (or horns), and both creatures have what look like feathers or scales on the front of their bodies. The small differences between the two creatures may be an attempt to show sex differentiation, Dosoo said, noting that the creature on the right may be a female and the one on the left a male. 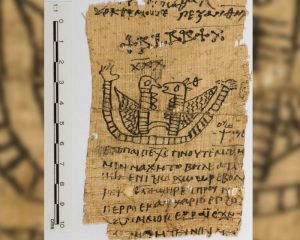 (This ancient Egyptian papyrus, now at Macquarie University, is decorated with an image of two bird-like creatures. A magical spell written in Coptic, an Egyptian language that uses the Greek alphabet, is visible around the image)

A magical spell written in Coptic, an Egyptian language that uses the Greek alphabet, surrounds the image. Just fragments of text have survived over the years, with part of the deciphered spell reading, “I call upon you … who is Christ the god of Israel …” The next part of the spell includes the words “you will dissolve” and mentions “every child of Adam…,” who according to the Hebrew Bible was the first man on Earth and lived with a woman named Eve in the Garden of Eden before being expelled by God. The fragmented text also mentions Ahitophel, a man who betrayed King David, according to the Hebrew Bible.

The papyrus seems to have been one page of a larger text, possibly a handbook that was used by a magician, Korshi said.

The hypothetical magician’s clients may have been impressed by the image on the papyrus. “From an observer point of view, we could say that the image might have enhanced the performative aspect of the spell — the client might find the weird drawings an impressive addition to the overall atmosphere and impression created by the ritual,” Dosoo told Live Science.