Descendants of people from northern Russia 31,000 years ago contributed a bit of DNA to Native Americans

For at least the last century archaeologists and anthropologists have generally agreed that the first humans arrived in North America having struggled across the icy wastes of Beringia, a vast land mass that bridged the seas between Siberia and Alaska. However, this has always been a ‘good theory’ because nobody was quite sure of the exact origins of these first peoples. Did the first arrivers survive as an unbroken lineage for over 15,000 years, leading to today’s Native Americans, or not, is the question? 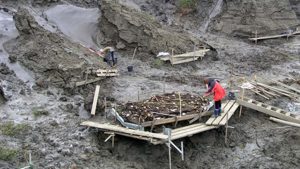 Beringia formed about 34,000 years ago and the first humans hunted their way across it more than 15,000 years ago with major migrations of Paleo-Eskimos about 5,000 years who populated the American Arctic region and southern Greenland. However, it has been a thing of debate; if today’s Eskimo-Aleut and Na-Dene speaking peoples are ‘direct ancestors’ of these ancient wanderers, or are related to later migrations of what are known as Thule people (Neo-Eskimos), about 800 years ago.

The Two-Pronged Genetic Approach Always Wins!
The pair of new DNA studies were built around data correlated from “rare fossils on both sides of the Bering Strait ”, which according to Smithsonian Magazine, “help write new chapters in the stories of these prehistoric peoples.” Published in Nature.com, the international team in the first of the two new studies analyzed the “genetic structures of modern and past Paleo-Eskimos and their descendants, who were among the earliest people in North America .”

The team, led by co-author David Reich of Harvard Medical School, compared the genes of “93 living Alaskan Iñupiat and West Siberian peoples remains of 48 ancient humans from the region”, and according to the paper, this confirms that “Yup’ik, Inuit, Aleuts and Na-Dene language speakers from Alaska and Northern Canada inherited some of their genes from Paleo-Eskimos.”

Two Sides Of The Same Genetic Problem
While the first study concentrated on North American genes the second focused on Asian genetic lineages. Also published in Nature, this project had its research team retrieving “genetic samples from the remains of 34 individuals in Siberia, dated between “600 to 31,600 years old.” In this study, a discovery that stood out was made in the DNA of a Siberian individual who died about 10,000 years ago. It contained what the paper says is a “genetic resemblance to Native Americans, more so than any other remains found outside of the Americas.”