“The ancient theatre of Eretria is a landmark of art, culture and history”

Audiences returned to the Ancient Theatre of Eretria for the first time in 40 years over the weekend, for three ancient tragedies performed between September 21 and September 23. The theatre has been undergoing restoration and is gradually returning to working order, with funding from the Central Greece Region, among others.

Τhe region’s deputy governor for Evia Fanis Spanos said the regional authority was extremely pleased to “have been part of this very broad collective effort”. 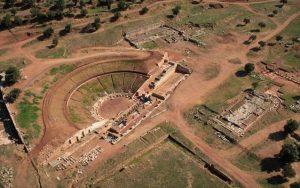 “The ancient theatre of Eretria is a landmark of art, culture and history, with immense value, not only for Eretria but for all Evia and Central Greece. I should mention that the theatre is being gradually restored; the work is not complete but some seats have been delivered, so far about 300,” Spanos said. He noted that 1.05 million euros in public investments have been earmarked for the Evia Antiquities Ephorate, which is carrying out the restoration with the assistance of local bodies and associations, and this was being gradually absorbed.

The plays performed over the weekend included Euripides “Eleni”, Sophocles’ “Oedipus Rex” and “Persians” by Aeschylus and were part of the pilot Ancient Drama Festival organized by the Pantion University’s Classical Drama and Spectacle.