Widespread anti-Trump protests are ongoing for a second day around major US cities, after the election results on Wednesday, which saw the outsider candidate under the Republican banner gain power. Thousands have been marching in Washington, Baltimore, New York and Philadelphia with banners and chants against Donald Trump, fearing the rhetoric he used during the election campaign, which was dubbed racist and hateful by the mainstream media, could usher in authoritarian policies. Police say that the protests were initially peaceful but escalated into violence and vandalism. Donald Trump tweeted he was being unfairly treated saying they were “professional” protestors, fueling the rage of the protestors even more. International media are reporting that the rioters have smashed cars and shop windows, with some security forces dubbing the protests a full fledged uprising. Some of the most violent clashes have taken part in the city of Portland with police saying that anarchist black bloc groups have infiltrated the protests and caused havoc. 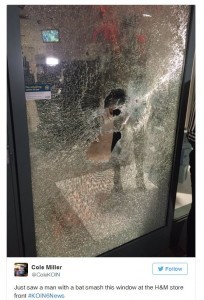