A little more than nine years after it made its debut in the United States, Apple sold the one billionth iPhone in July 2016. By the end of March 2017, the tally had grown to 1.16 billion units and when the iPhone turns 10 on June 29, Apple will likely have sold 1.2 billion smartphones.

Having generated more than $700 billion in revenue and in more than $100 billion in net profit for Apple, the iPhone might well be the most profitable piece of technology to ever have hit the market. It has transformed Apple from a company with $19 billion in annual sales (in 2006) to the most valuable company in the world, raking in $216 billion in its latest fiscal year. 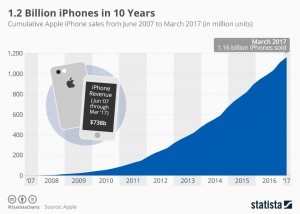