The book was written by Michael Masters, a professor of biological anthropology at Montana Technological University in Butte

Unidentified flying objects (UFOs) have captured the public’s attention over the decades. As exoplanet detection is on the rise, why not consider that star-hopping visitors from afar might be buzzing through our friendly skies by taking an interstellar off-ramp to Earth?

On the other hand, could those piloting UFOs be us — our future progeny that have mastered the landscape of time and space? Perhaps those reports of people coming into contact with strange beings represent our distant human descendants, returning from the future to study us in their own evolutionary past.

The idea of us being them has been advanced before. But a recent book, “Identified Flying Objects: A Multidisciplinary Scientific Approach to the UFO Phenomenon” (Masters Creative LLC, 2019), takes a fresh look at this prospect, offering some thought-provoking proposals. 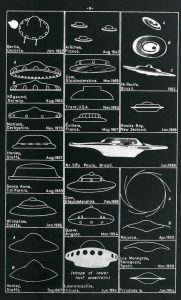 The book was written by Michael Masters, a professor of biological anthropology at Montana Technological University in Butte. Masters thinks that – given the accelerating pace of change in science, technology, and engineering –  it is likely that humans of the distant future could develop the knowledge and machinery necessary to return to the past.

The objective of the book, Masters said, is to spur a new and more informed discussion among believers and skeptics alike.

“I took a multidisciplinary approach in order to try and understand the oddities of this phenomenon,” Masters told Space.com. “Our job as scientists is to be asking big questions and try to find answers to unknown questions. There’s something going on here, and we should be having a conversation about this. We should be at the forefront of trying to find out what it is.”

Dubbing these purported visitors “extratempestrials,” Masters notes that close-encounter accounts typically describe UFO tenants as bipedal, hairless, human-like beings with large brains, large eyes, small noses and small mouths. Further, the creatures are often said to have the ability to communicate with us in our own languages and possess technology advanced beyond, but clearly built upon, today’s technological prowess.

Masters believes that through a comprehensive analysis of consistent patterns of long-term biocultural change throughout human evolution — as well as recent advances in our understanding of time and time travel — we may begin to consider this future possibility in the context of a currently unexplained phenomenon.

“The book ties together those known aspects of our evolutionary history with what is still an unproven, unverified aspect of UFOs and aliens,” he said.

But why not argue that ET is actually a traveler from across the vastness of space, from a distant planet? Wouldn’t that be a simpler answer?

“I would argue it’s the opposite,” Masters responded. “We know we’re here. We know humans exist. We know that we’ve had a long evolutionary history on this planet. And we know our technology is going to be more advanced in the future. I think the simplest explanation, innately, is that it is us. I’m just trying to offer what is likely the most parsimonious explanation.”