Argentina Navy submarine ARA SAN JUAN disappeared in waters of Puerto Madryn, northern Patagonia, Argentina, contact with submarine manned with 40 crew lost since Nov 15. It was said that submarine was already located and taken on tow, being disabled after fire, but according to most recent news, citing Navy officials, submarine wasn’t found, her fate, and fate of the crew, unknown.

On a photo Eliana Maria Krawczyk, one of the crew of the missing submarine in officer’s rank. 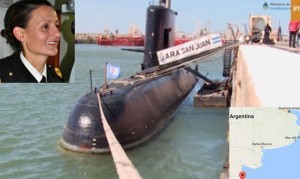