The Greek history in marble

Ever wondered how huge hunks of marble are shaped into exquisite works of art? Tinos’s Museum of Marble Crafts reveals all.

More than any other material, it is marble that is most associated with Greek art and architecture, from antiquity until today. And no place has a richer modern marble-crafting tradition than the island of Tinos, located near Mykonos in the northern Cyclades.

Tinos’s rich heritage in marble craftsmanship was recently recognized by UNESCO which in 2015 ‘inscribed’ it it in its Representative List of the Intangible Cultural Heritage of Humanity.

The island has produced some of the greatest modern masters of the craft such as Yannoulis Chalepas (1851-1938). It is also home to the Preparatory and Professional School of Fine Arts that is dedicated to marble working and from where many graduates move on to take their craft to new heights at Greece’s School of Fine Arts.

It is thus fitting that Tinos is home to the Museum of Marble Crafts, dedicated to this rich history of marble production and craftsmanship. 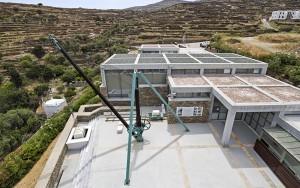 Tinos’s Museum of Marble Crafts houses an impressive collection of authentic artifacts such as secular, ecclesiastical, funerary and everyday objects made of marble (door lintels, fountains, family crests, corbels, shrines, mortars and more). This collection is further enriched by plaster of paris and clay copies of key works, as well as a rich collection of original sketches by master craftsmen (the richest collection in Greece).

Together with its marble elements, the museum features a recreation of a marble quarry and a craftsman’s workshop, allowing visitors a detailed look into how this unforgiving material is shaped into fine sculptures and architectural elements, a process that requires both physical strength and incredible skill.

The exhibits are not confined to the museum’s interior. In the courtyard visitor’s will see salvaged mechanical equipment including an impressive crane for hoisting large blocks of marble and old industrial carts and wagons.

Hands-on exhibits have also been created to further engage children, allowing them to see and touch marble rocks in their natural state and observe their colors and crystals under a magnifying glass. Live demonstrations with local craftsman and group tours with games and activities can also be arranged. 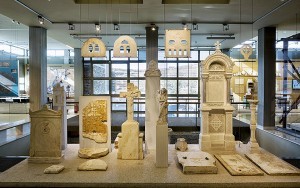 Outside of the museum one can also see marble works in their ‘natural state’ the nearby village of Pyrgos, a short 10-minute-walk away. Almost an outdoor museum in its own right, the village’s houses and shops are richly adorned with marble ornamentation and sculptures. In a place where even the bus-stop is constructed almost entirely out of marble, one can see that the material is not just a natural product, but a way of life.