Entering the team’s home court gym, the large white banner with a fist smashing a Nazi swastika and the words “Smash the Nazis”

The neighbourhood of Exarchia in Athens is not your typical area in the capital of a major European city. It is the home of the Greek anarchist movement where police fear to enter. When they do decide to enter, the area turns into a real battleground. The city’s most anarchist-friendly district was at the centre of global media attention more than once, most notably for the widespread riots that in 2008, after 15-year-old Alexandros Grigoropoulos was shot and killed there by police.
Since then, Exarchia has become a gathering place for anti-government protesters, a group that has gained a larger following amid Greece’s rising political and economic problems.
But recently the locals were not “up in arms” over any “breach” of their zone by police forces, but were celebrating their basketball team’s “Asteras Exarchion” promotion to a higher division. The atmosphere was celebratory in their home court gym for their last match against Evnikos.

Although the team had already won their promotion earlier, the match was significant as Asteras needed a win to clinch the first spot and the unofficial title of the second amateur division of the Attica region.

Entering the team’s home court gym, the large white banner with a fist smashing a Nazi swastika and the words “Smash the Nazis”, jumps out at you from across the wall. The fans gathered in the stands are there to support Asteras, but in no way to intimidate the opposing players. That kind of behaviour is unknown here. You will see people, women, men, youth and elderly singing, drinking (alcohol is permitted here), rolling a smoke and soaking the festive feel. 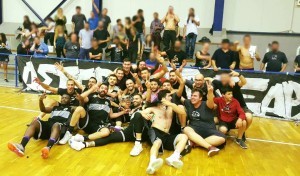 Many players were surprised to encounter a ubiquitous feeling of solidarity and comradeship at the club and how involved and close to the club the locals were.
“When I came I did not know exactly what Asteras is. I parked outside the stadium and heard a crowd. I said to myself ‘What’s going on here, I must have made a mistake’. I was expecting to play in a regular match and I suddenly find myself playing in my first match amid a hell of an atmosphere. Then I said I am going to stay”, said Antonis Michailidis, 24. who is at the club for a second season.
Stefanos Daubert is 26 and started off as a football player, but changed to basketball. “ 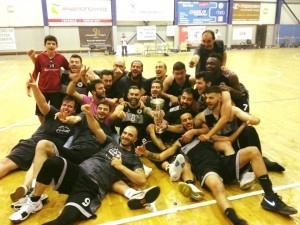 “Before I came to Asteras, I knew about the football club more than basketball. It was also close to my home, but one reason I wanted to come was for the peculiarity of this team. ” “The nice thing about the crowd is that you participate and it spurs you on when you are sitting on the bench. You want to shout for your teammate and the team”. He says.
For the record, Asteras defeated their opponents in a nail-biting match 65-64 with a basket 9 seconds before the end. Crazy celebrations erupt both on the court and in the stands.

Asteras has done it!