The Atacama desert rests undisturbed by any sign of human activity

One can get lost and stranded anywhere, but nothing’s as this god forsaken place. Composed of endless valleys filled with nothing but sand, low hills and rocky dunes for miles and miles in every direction, the Atacama Desert in northern Chile is the driest non-polar desert and the most desolate place on Earth.

The scorched moonscape and Mars-like terrain, suggests an artificial humongous movie set of over 128,000 square kilometers, solely built to shoot the expedition to Mars.

In spite the fact that the Atacama resembles the Red Planet, not many movies were shot here. And there is a strong reason why that’s the case. 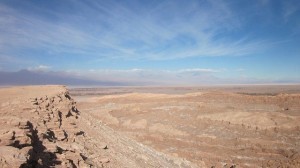 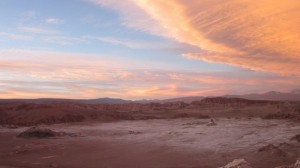 (Alle de la Luna -Valley of the Moon- is an area in the Atacama desert of Chile. It is located 13 kilometers -8 mi- west of San Pedro de Atacama, Chile in the Cordillera de la Sal)

Studies administered by NASA showed that the average rainfall in this region was about 1mm per annum, with vast areas of the desert, not receiving rain at all for many, many years. Their evidence even suggests that some locations within the desert, especially its central area, have never had any rainfall. This, along with the unbearable extremes in temperatures of 40º C (104º F) in the sun and 5º C (41º F) during the nights, makes this desert so arid that it is nearly impossible for one to stay here for an extended period.

For this reason, it is very strange that the earliest artificially mummified human remains have been found right here, in this desert, indicating the thriving of a long lost civilization.

In 1917, a German archaeologist named Max Uhle, first identified that people who relied mostly on fishing, hunting and gathering for substances, lived in the Atacama Desert and southern Peru between 7000 and 1500 B.C. In his archeological expedition, he found mummified remains of the Chinchoros that predate the Egyptian mummies by thousands of years. 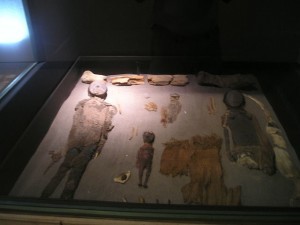 (Hinchorro mummies, ones of the oldest preserved in the world – Museum in San Miguel de Azapa, 12 km from Arica) 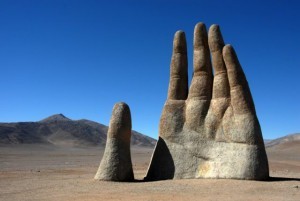 (Hand in the Atacama Desert in Chile) 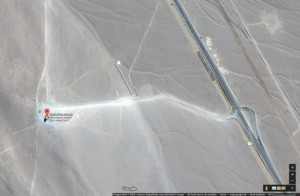 The Atacama desert rests undisturbed by any sign of human activity with its monotonous sight that seems even more alien than the desert itself. A small gravel road about 75km south of the town of Antofagasta marked 1309 on the Pan-American Highway, leads to a large 11-meter-tall cemented hand, protruding above the sand. It is the work of the Chilean sculptor Mario Irarrázabal, named La Mano del Desierto or ”the Hand of the Desert.”

To portray the vulnerability and helplessness of the Chilean people, especially the miners of the city of Antofagasta, the remote center of Chile’s copper mining industry, the sculptor Mario Irarrázabal created four outstretched fingers and a thumb that gives the impression of a buried giant reaching for the sky asking for help.

The Hand sits 75 kilometers outside the city. The fact that it is buried in such a desolate place, so remotely distant from the civilized world, adds to the profound effect that Mario was trying to share with the world. 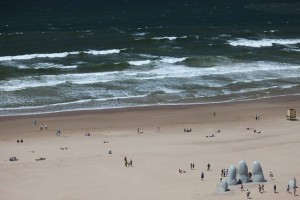 It makes a person wonder, how a monument like this was built in a place such as this, with no water around for miles and miles…The sculpture is taller than an NFL goalpost and was inaugurated in 1992.

Another hand, the right one, resides in the Atlantic coastal resort of Punta del Este, 1,200 miles east of Antofagasta, a creation by the same artist, named “Man Emerging to Life,” commonly known as the “Monument to the Drowned.”

The two of them combined manifest a wondrous artistic expression. A subterranean giant who is holding all of South America in its grip.