NASA could do a better job of tracking its history, federal investigators have found

After 60 years of space exploration, NASA could do a better job of tracking its history, federal investigators have found.

The NASA Office of Inspector General (OIG), the independent investigation arm of the space agency, recently completed an audit of NASA’s historic property and, in the wake of several high profile losses, has recommended that the agency adopt a more effective approach to identifying and managing its space artifacts. 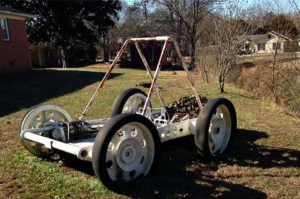 Further, said investigators, the OIG’s efforts to recover artifacts that have escaped NASA’s control have been “thwarted” by the space agency’s “poor record keeping and a lack of established processes.”

The OIG conducted its review of NASA’s historic holdings as an extension to an eight-year assessment of the agency’s aging infrastructure and facilities. The audit came on the heels of several investigations about space artifacts for which NASA had a vested interest in recovering but were instead relinquished as a result of the agency’s reluctance or inability to quickly assert ownership. 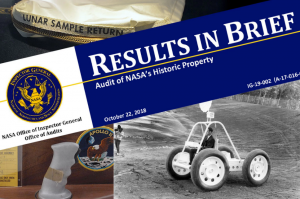 In one such case dating back to 2015, a U.S. Air Force historian saw what he believed to be a prototype lunar rover in a residential backyard in Alabama. After reporting the find to NASA, the case was referred to the OIG, which learned that the rover’s owner was amenable to returning the moon buggy to NASA.

“The OIG requested NASA assert ownership of the rover and, if appropriate, make plans to accept it as a donation,” the audit reports. “However, after waiting more than four months for a decision from the agency, the individual sold the rover to a scrap metal company.”