It’s been seven years since the murder of Aristotelis Goumas, a crime that encapsulates the struggles of the Greek Minority of Albania.

His murder by the Albanians uncovered only a part of the not known until then covert tactics of the “velvet ethnic cleansing” that is under way as we speak by the Albanian state against the indigenous Greek Minority.

On August 13, 2010, the news blasting from the much afflicted and heroic Himara struck with horror, grief as well as with abhorrence Hellenism throughout the world. A gang of Albanian youngsters in cold blood killed a 37- year-old Northern Epirotan young man, Aristotelis Goumas, because he dared to speak Greek inside his own shop Several incidents of verbal violence as well as of frays by indignant Albanians sticking around the area threatening and writing insolent graffiti on the walls of houses and shops run by Greeks have been recorded in the last few years. Similarly during the last 3 elections when the whole Albanian state mechanism attempted to debase the Himarans’ voting will it in turn wielded thuggery and truculence. However in this case provocations resulted in a tragic incident.

According to Himarans’ Union information, groups of hecklers had arrived in Himara from August 9. They created repeated incidents, mistreated the locals, locked with some of them and in several instances threatened them with knives on the ground that Greek language was spoken by Himarans. 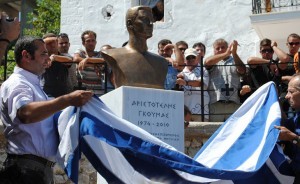 Of course the Northern Epirotan political bodies responded swiftly, with OMONOIA, the Central Association for Human Rights (K.E.A.D.) and other organizations condemning the assassination and what preceded it, protesting in the international fora about the ethnic pogroms against Himarans and seeking an exemplified punishment for the culprits. At the same time Greek prefects in the region of Northern Epirus moved onto closing their regions’ services down for 1 hour in memoriam of Aristotelis. We reckon that the minority bodies could have reacted even more dynamically as the only protest was organized by the Himarans’ own initiative without OMONOIA playing a leading role. We also regard that Aristotelis ought to have been honored officially by the minority’s leadership at a burial service.

“With great grief I feel compassionate to the deep sorrow inflicted by Aristotelis Goumas’ assassination in Himara, praying to God to repose his soul in peace. Such undue acts of violence, totally condemnable by every sensible person, are posing a menace of dynamiting our congruous co-existing that all Albanian citizens have contended for. Moreover they are risking to setoff conflicts and hatred in the wider region.

In Greece, where already on the eve of the National-Religious holiday (August 15) everything ran out of steam, there was a fear that that horrible crime would have been put away due to the seasons’ indolence and to the ordinary remission of the Greek state. However all Northern Epirotan associations and bodies (the part that private Internet sites and blogsots played was very important at this point) since early morning they began storming the Greek media with press releases and reports from Himara. The incomprehensible and savage incident of the assassination of a Greek who was just speaking his own language shook Hellenism throughout the world. The reaction of the opposition as well of the smaller parties compelled also the government to castigate the incident although in a delay and request full unraveling of the affair by their Albanian counterpart. That resulted in the Aristotelis assassination’s broadcast thoroughly by the Greek media and it was for the first time that the essence of those facts was conveyed without any blinders. That is that Albanians have been denouncing the uncontested Greekness of Himara. 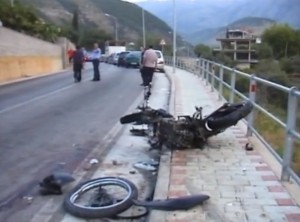 “The murder of a person in any case, moreover deliberately, is a hideous and condemnable crime. In case convictions are vindicated then the motive would appear even more hideous. The government has ordered police to shoot their bolt so that the main perpetrator of this crime will be impeached. Once again I am stressing out that in case that convictions reported by the media and others will be vindicated, is going to translate the crime into even more cruel. It is an act of extremist and blind fanaticism. I don’t think that there exist Albanians who are not aware that this city’s community is bilingual, not only in our days but since 100 and even 200 years, that is to feel free to respond in your favorite language. In case for one to respond and in turn to get involved into such an incident is really too heavy. Nonetheless all that will be investigated and verified by Justice. On this occasion I grasp the opportunity to express again my condolences to the family since killing someone while on his way back home is an awful act. It is an atrocious act”. 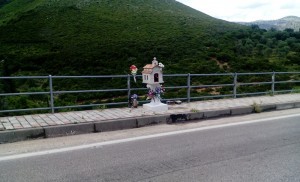 First Himara people’s dynamism and militancy that did not stand fatalistically to the assassination of their fellow-countryman resulted in the whole Albanian state being shaken up and reacted even spasmodically supporting justice and public order. It is just a message also to our Northern Epirotan brothers and their leadership but also to all those who sympathize with this land. They should react collectively, dynamically and robustly to violations of their own rights. Now is the time for those who like to call themselves leaders of Hellenism in Himara to straightforwardly and explicitly claim reinstatement of Greek nationality in Himara as well as opening of a Greek public school in the area. This should not only be kept to releases through the media but also to be filed as solemn proposals to the Albanian government and as prerequisite (sine qua non) for pre-election collaboration. Meaningless verbal protests or coalescence with any Albanian political party never have nor will resolve any issue of the Greek community in Northern Epirus nor will make Albanians to keep to them. Besides it is quite evident that joint action, taken up as much  by the Northern Epirotans inside their homeland and in Greece as by Northern Epirotan bodies in Greece as well as abroad, is conducive to achieving any goal but mostly to the awakening of the normally dormant Greek state like in this recent case. We can not but welcome that Aristotelis’ assassination was condemned by our country’s full political spectrum. Moreover a number of media covered the incident with detailed reports, in effect pointing out and informing on the issue of the Albanian nationalism and the oppression to the people of Himara.