Kmart stores in Australia are selling a line of same-sex family dolls, complete with two children and a pet, oriented toward children as young as three-years-old.

According to Aussie news site 10Daily, the store has released “family playset” dolls for children age 3 years and older, which include two fathers, or two mothers, as well as a young child, a baby, a dog, and a picnic set. 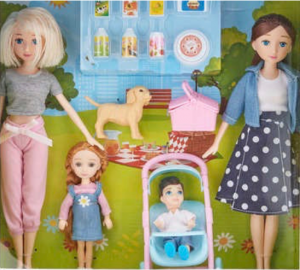 The dolls are supposedly “inclusive for same sex couples,” according to 10Daily, which does not explain why children as young as three would be concerned with the dolls’ gender.

The article goes on to quote various adult Facebook commenters who expressed approval of the dolls, under the headline “Kmart Fans Applaud Same-Sex Family Doll Sets.”