According to new research from Gallup, many countries on the frontlines of Europe’s migration crisis are among the least-accepting countries worldwide for migrants. The research found that FYROM, Montenegro, Hungary, Serbia, Slovakia and Croatia which are all along the Balkan route for asylum seekers recorded the lowest scores for accepting migrants. Greece also came in very low as it occupied 113th spot out of the 138 in the list, with an acceptance score of 3.34 out of 9.0.

Iceland was at the opposite end of the scale, scoring 8.26 out of 9.0. It was followed by New Zealand and Rwanda. Germany which has taken in huge numbers of refugees in recent years came 23rd overall with 7.09. The United States came 18th with 7.27. The United Kingdom came a distant 38th for migrant acceptance, scoring only 6.61 out of 9.0. 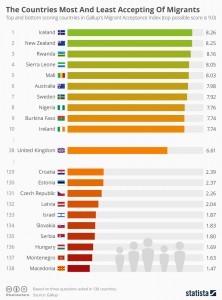