Upheaval would be caused by rising appeal of populist parties

These “earthquakes” could be caused by the rising appeal of “populist parties”, which could see some of them winning elections, and also by the need for mainstream parties to form previously unthinkable alliances, the article argues.

“Europe’s crisis of democracy is a gap between elites and voters,” EIU notes and adds that there is “a gaping hole at the heart of European politics where big ideas should be.”

According to BBC, this phenomenon can be attributed mainly to the low turnouts at the polls and the sharp falls in the membership of traditional parties.

The article characterizes the upcoming election in Greece as the most immediate political challenge, noting that the election process on January 25 will test how far growing populism translates into success at the polls.

Referring to recent opinion polls that point to a main opposition victory, the EIU argues that if SYRIZA emerges as the strongest party in the election and wins an absolute majority, “this would send shock waves through the European Union and act as a catalyst for political upheaval elsewhere.”

“The election of a Syriza government would be highly destabilising, both domestically and regionally. It would almost certainly trigger a crisis in the relationship between Greece and its international creditors, as debt write-offs form one of the core planks of its policy platform,” the EIU underlines. 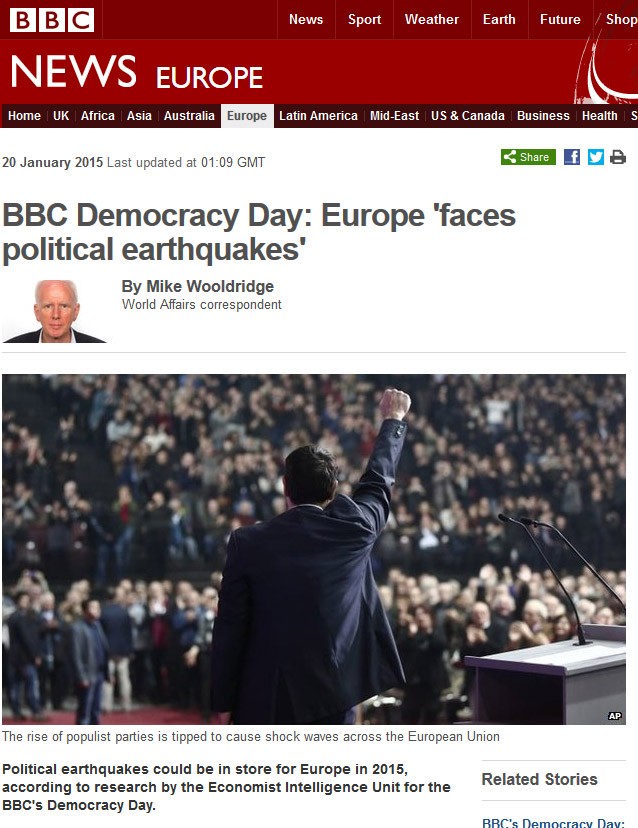