Make sure to scrutinise your Facebook messages VERY carefully — even if they are sent from one of your closest pals.
A scam is spreading across the social network, causing friends to inadvertently put their chum’s phones and gadgets in jeopardy.
Potential victims are met with an innocent-looking prompt to check out a video in a Messenger chat box.
The message includes the recipient’s name, the word “video” and a shocked emoji followed by a link.
After clicking on the link, victims are taken to a fake YouTube channel which is booby-trapped with nasty software, Bleeping Computer report
IT security research David Jacoby wrote in a blog post: “The link points to a Google Doc.
“The document has already taken a picture from the victim’s Facebook page and created a dynamic landing page which looks like a playable movie.
“When the victim clicks on the fake playable movie, the malware redirects them to a set of websites which enumerate their browser, operating system and other vital information.
“Depending on their operating system they are directed to other websites.”
This malicious software, if downloaded, will cause you to spread the virus to your contacts on Facebook Messenger. 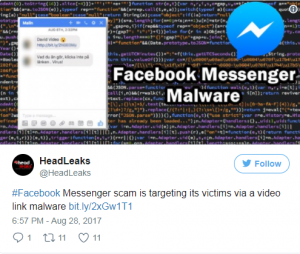