While the Fire Brigade continues to fight to bring under control the fire that broke out on Saturday afternoon in Ziria, Achaia, there are other fire fronts throughout Greece, namely in Rhodes, Agrinio and Soufli.

In Rhodes the fire front is not under control. In the above-mentioned areas, the competent authorities proceeded to the evacuation of settlements and villages.

The fire that broke out at noon on Sunday is moving towards the Kalamona camp. The competent authorities have already proceeded with its evacuation, as they did as well in the Valley of the Butterflies. 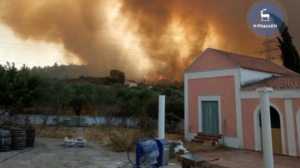 The evacuation of the village of Psinthos is still in progress.

At the same time, many areas are without electricity due to the fire. Problems also arose in mobile telephone network, either because antennas were destroyed by fire or due to power cuts.

Many areas of the island have also been left without water. 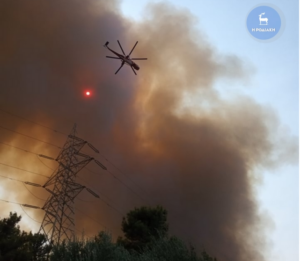 The fire broke out shortly before 15:00 at noon, between the communities of Soroni and Tholos in the area of ​​Pantanassa.

At the same time, according to information from the Fire Brigade, 40 firefighters with 18 vehicles, volunteer firefighters and local authorities have been thrown into the battle of extinguishing the fire, while the Greek army is also assisting.

At the same time, the Russian Beriev-200 and three helicopters are operating from the air.

Greek Foreign Ministry: Turkish allegations for the dead in Evros are rejected – Turkey should guard its borders 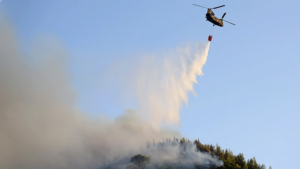 The situation is better in Paradisi, in the Municipality of Agrinio, where a pine forest is on fire.

For precautionary reasons, the villages of Paradisi and Perpati were evacuated.

Specifically, according to the latest information, 51 firefighters and 16 vehicles are attempting to extinguish the fire, while 5 aircraft and 3 helicopters are operating from the air.

The fire that broke out in the village of Kotronia in Soufli led to its evacuation for precautionary reasons. Six residents left the village and were transferred to the neighboring village of Dadia.

A total of 57 firefighters and 24 vehicles are operating on the scene, along with 4 airplanes and 2 helicopters. Hellenic Army forces are assisting the Fire Brigade’s efforts.