Bill Murray, the Caddyshack co-star and all-around American icon, was seen walking down Dioysiou Aeropagitou street in Athens. The actor took part in a theatrical play on June 19, at the Odeon of Herodes Atticus, an ancient stone theatre at the foot of the Acropolis. The Ghostbusters star was part of a predictably unconventional performance called New Worlds by “Bill Murray, Jan Vogler and friends” which was included in this summer’s lineup of the prestigious Athens and Epidaurus Festival. Think verse by Walt Whitman, as interpreted by cultural chameleon Bill Murray, accompanied by a cello. 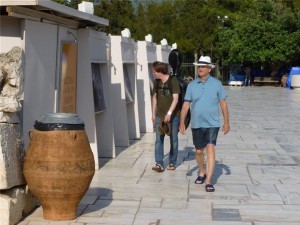 Murray met German cellist Jan Vogler met on a transatlantic flight, and the two had an idea. According to the program notes, “New Worlds is a performance bridging the artistic legacy of America and Europe, highlighting the fundamental values of American literature and music. During their travels, the two men also met violinist Mira Wang and pianist Vanessa Perez, who will also be performing in New Worlds. Murray will perform pieces by Foster, Gershwin and Bernstein, in addition to reading excerpts from classic American poets and writers (Whitman, Hemingway, Twain) to the sounds of Vogler’s Stradivarius cello.” 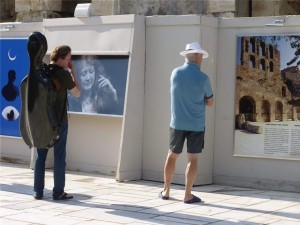 The atmospheric Athenian theatre was built in honour of Aspasia Annia Regilla, the wife of a wealthy Athenian named Herodes Atticus. It’s a dramatically situated Roman Odeon that dates from the 2nd century A.D. and was restored in the 1950s. With a capacity of 5,000, over the years it has welcomed the likes of Luciano Pavarotti, Frank Sinatra, Liza Minnelli and Maria Callas. 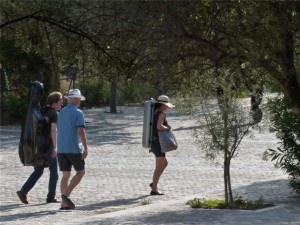 Founded in 1955, the Athens and Epidaurus Festival is Greece’s foremost cultural festival and one of the oldest performing arts festivals in Europe. The Epidaurus performances are presented every Friday and Saturday, from the beginning of July to mid-August, at the renowned theatre of Epidaurus (said to be the best preserved of all ancient theatres) and little theatre of ancient Epidaurus. Athens Festival performances are presented between June 1st and mid to late July.