Among other things, Bitcoin has been criticized for price volatility, use in illegal transactions and thefts from exchanges. It has also proven highly controversial for the sheer amount of energy it requires. The University of Cambridge has released a new online tool that estimates the level of electricity the crypto-currency network uses and compares it with other entities. It estimates that Bitcoin uses 61.76 terawatt-hours (TWh) of electricity per year, more than many countries and around 0.28 percent of worldwide electricity consumption.

The Czech Republic consumes an estimated 62.34 TWh while Switzerland consumes 58.46 TWh annually by comparison. In fact, if Bitcoin was a country, it would be the 41st most-energy-demanding nation on earth. All of that thirst for electricity comes from the computing power needed for mining, which is a process where machines are connected to the network to verify transactions, which involves puzzle-solving. Some Bitcoin miners have even relocated to places like Iceland to reduce costs as geothermal energy is abundant there while cold Arctic air helps with cooling. 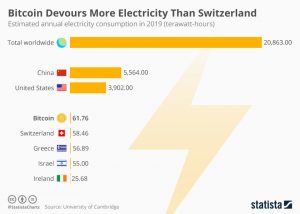