The deceased is posed with video games, sunglasses & snacks

A family whose teenage son died honored his memory in an unusual wake: His corpse was positioned in a chair facing a television screen, a video game controller in hand and his favorite snacks next to him.

Renard Matthews, 18, of New Orleans, La., was robbed and shot to death on the evening of June 25 while walking his dog. Matthews, whom a neighbor described as “a nice young man,” loved football and basketball; his favorite athlete was Celtics guard Kyrie Irving, his mother, Temeka, told a local news station, WGNO. On Sunday, his wake presented a faithful reflection of his low-key lifestyle. The family had Matthews embalmed and placed in a stance that was typical for him. He was seated in a chair, wearing an Irving jersey and sunglasses, with a PlayStation controller in his hand, facing a television playing the Celtics. He was flanked by Doritos and soda. 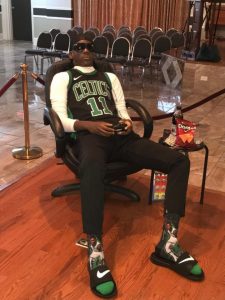 The funeral home where the wake was held is accustomed to unique requests. “One time, we stood a deceased drummer from a grassroots band at a drum set,” a representative from the Charbonnet Labat Glapion Funeral Home in Tremé, tells Yahoo Lifestyle, adding that it recruits specialists to prepare bodies at varying costs, which differ depending on the details of the service.

The funeral home also hosted the 2014 wake of Miriam “Mae Mae” Burbank, 53, who was posed with a beer, a menthol cigarette, and an ashtray at a table. Burbank, a fan of the New Orleans Saints football team, had her fingernails painted in the team colors of black and gold.

(Miriam Burbank, 53, was honored at her wake)

Burbank was described by her loved ones as a “party girl” who loved beer and scotch. “When I walked in, I feel like I was in her house and I didn’t hurt so much,” her sister Sherline Burbank told WGNO. “Because it’s more of her, and it’s like she’s not dead. It’s not like a funeral home. It’s like she’s just in the room with us.”

Burbank’s daughter Zymora Kimball also told the news station that not everyone approved of the send-off. “A lot of people didn’t accept what I was doing,” she said. “I didn’t let that stop me, and I know she’s happy with how she’s looking. That’s her, that’s Mae.”

The unique custom has been called “extreme embalming,” reports ABC News, and honors the deceased in personalized ways. It’s particularly popular in Puerto Rico, where a handful of creative services have won attention. 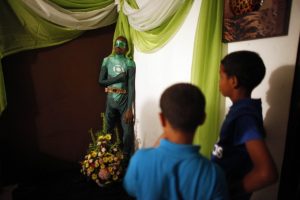 (The body of Renato Garcia was dressed as the superhero the Green Lantern for his 2015 wake in San Juan, Puerto Rico)

In 2015, Green Lantern fan Renato Garcia, 55, died of an asthma attack and was bid goodbye in the costume he often wore around town. “It is what he would have wanted,” said sister Milagros Garcia, per the Daily Mail. 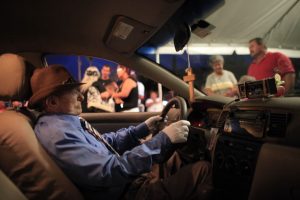 (The body of Victor Perez Cardona, 73, was honored inside the taxi cab he used to drive)

That same year, the body of taxi driver Victor Perez Cardona, a former cancer patient, was positioned in his cab — with his hands on the steering wheel — a request his daughter says was characteristic of her father, who loved jokes. According to the Daily Mail, some mourners even sat beside Perez Cardona for one last ride. 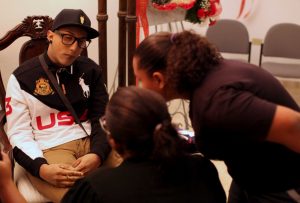 In 2016, the body of Fernando de Jesús Díaz Beato, 26, was seated in a chair with one leg crossed over the other, wearing a black cap, glasses, khaki pants, and sneakers. “Some people say that it doesn’t look good,” his sister Lhizz Díaz Beato told BuzzFeed. “They prefer something more traditional. But if that’s something that the family wants, why wouldn’t you do it?”