They were judged to be suspected of fleeing

The Turkish Court rejected an appeal for release by the two Greek servicemen held in a high-security prison in Adrianople for a third time. Their appeal was turned down on the grounds that they were judged as suspects of fleeing.
Turkish media released new images and videos from the transfer of Angelos Mitretoudis and Dimitris Koutlatzis to the court.

The two soldiers were transferred to the court in the presence of their lawyers, Hakan Yalçıntuğ and Selin Özel, who filed a new release appeal a few days ago. The process lasted about one and a half hours. 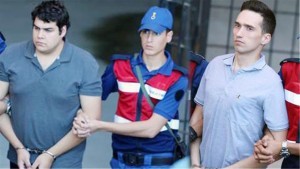