The Greek island of Syros could be the focus of block buster Hollywood productions in the not too distant future, if the Greek government manages to speed up all the necessary steps to make the investment possible and viable. During a joint press conference in Athens, Monday, Hollywood director-screen writer Steve Bernstein, along with South Aegean regional governor George Chatzimarkos, Cyclades region vice-governor George Leontaritis, and other pros from the US film industry presented their ideas on the setting up of a film school and a production studio on the Aegean island. The meeting, which took place on the roof top of the Electra Hotel, is part of an ongoing process that hopes to combine the natural beauty of the Aegean isle and the power of Hollywood. The talks started when Steven Bernstein was captivated by the landscape of Syros a year ago and initiated talks and conrtacts with competent government officials. 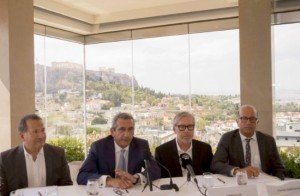 The South Aegean Region wants to harness the power of the moving image, the most powerful means of promoting a tourism destination internationally. To this end it pressed the central government to harmonise relevant regulations with those in the EU that facilitate such types of investments which led to the voting of the relevant law in August. Although this was a significant step in the right direction, the participants acknowledged that more was needed both on an administrative level, as well as a financial one for Greece to become competitive and attract large investments.

Steven Bernstein is known as a mover and shaker in Hollywood, lending his talents to films such as Monster, which won a best actress Oscar for Charlize Theron, Dominion with John Malkovich, Like Water for Chocolate, One Night With the King, and others. His cinematography in ad work has won the Golden Lion at Cannes, and his how-to book, Film Production, is a standard among aspiring cinematographers and filmmakers. 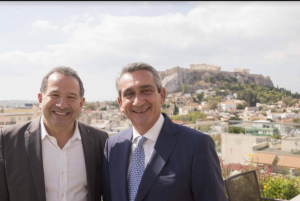 The benefits of the project not only for the South Aegean, but the Greek economy as a whole, are potentially tremendous, based on survey results focusing on film and tourism.

Tourism Competitive Intelligence, an award-winning tourism research agency, says that 40 million people annually choose a tourism destination because of a movie they saw. The islands of the southern Aegean and their potential as film subjects, are qualified to place very high on the list of sought-after film destinations. The Southern Aegean Region is working in this direction seriously and intensively.