The iPad sales have been in a steady decline since 2014

Following its annual iPhone event in September, Apple is holding another launch event, dedicated to the rest of its product line-up, in New York City on Tuesday. Under the tagline “There’s more in the making”, the company is rumoured to be unveiling several new devices on Tuesday, with the MacBook line and the iPad Pro among the safest bets to get a facelift at the event.

The iPad, in particular, could receive a major overhaul this year, to bring its design in line with the latest iPhone models, i.e. smaller bezels, no home button, Face ID. While still the best-selling tablet in the world, the iPad has lost a bit of its magic in recent years. Unit sales have declined for four consecutive years since 2013, as longer upgrade cycles compared to phones and the rise of phablets thwarted tablet sales after three years of blockbuster growth. 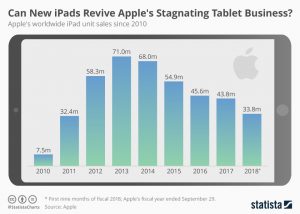