Having successfully connected large parts of the world through its social media and messaging platforms, Facebook is now taking on a new project: creating a “more inclusive global financial system”. The world’s largest social media company introduced a new cryptocurrency named Libra this week, which will be run by the Libra Association, an independent, non-profit organization based in Geneva, Switzerland, whose founding members include companies such as Mastercard, Visa, eBay, Uber, Spotify, Vodafone and, of course, Facebook itself, among others.

“Libra’s mission is to enable a simple global currency and financial infrastructure that empowers billions of people”, the currency’s mission statement reads, adding that despite all progress made in connectivity and access to information and services, “1.7 billion adults globally remain outside of the financial system with no access to a traditional bank” and that “access to financial services is limited or restricted for those who need it most — those impacted by cost, reliability, and the ability to seamlessly send money”.

One of the most important areas that could be impacted by Libra is remittances, i.e. money transfers by migrants to their families back home, which have proven to be a crucial driver of economic development. According to the World Bank, remittances to low- and middle-income countries reached a record high of $529 billion in 2018, with total remittances climbing to $689 billion. The problem being that sending money to people without access to a financial system, especially in regions most reliant on remittances such as Sub-Saharan Africa, is difficult and costly. In Q4 2018, the average cost of sending $200 to Sub-Saharan Africa was roughly 9 percent. Applying that 9 percent to the $46 billion sent to the region last year, brings total costs to $4 billion. Lowering the average cost to the global average of 7 percent would result in more than $1 billion in additional funds where they are needed most, not to mention the positive effect an even larger reduction of transaction costs could have.

“Success will mean that a person working abroad has a fast and simple way to send money to family back home”, Libra’s mission statement reads. This is in line with the UN Sustainable Development Goals which aim to reduce the transaction costs of migrant remittances to less than 3 percent and eliminate remittance corridors with costs higher than 5 percent by 2030. 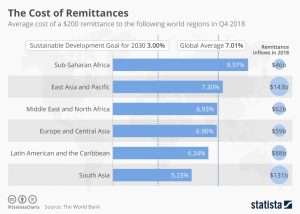