The crisis in Spain dramatically deepened and extended across the Continent after eight Catalan ministers were jailed by a court in Madrid and a European arrest warrant was issued to extradite the region’s disputed president Carles Puigdemont from Belgium on charges of rebellion and sedition.

The punitive moves by the Spanish courts are going to provoke anger and resentment in Catalonia, which has voted for independence in a referendum. Separatist activists reacted to the news by calling for mobilisation and street protests. 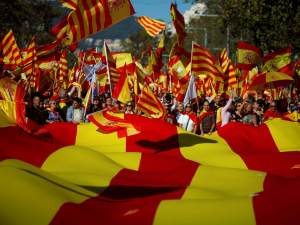 Former deputy vice-president Oriol Junqueras, and former ministers Joaquim Forn, Raul Romeva and Carles Mundo, were among those denied bail and sentenced to immediate custody pending investigation and a trial.

Four other members of the separatist administration were, however, allowed bail to prepare their legal defence, with a hearing scheduled for next week.

Spain’s chief prosecutor, in a request to the Supreme Court for an arrest warrant to be issued for Mr Puigdemont, said: “Repeated attempts to deliver the summons at home and repeated phone calls have been ignored. For his part, Carles Puigdemont has publicly stated his intention not to appear and has requested… to make a statement via videoconference, without giving any information about his current whereabouts.” 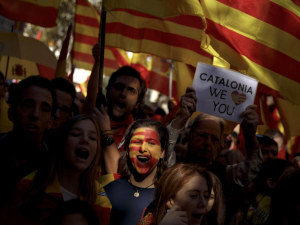 The Catalan president should, he stated, be arrested and held in custody in Belgium pending his return.

The legal manoeuvres leave it unclear whether Mr Puigdemont and his colleagues would be able to participate in the snap election called by the government of Mariano Rajoy for 21 December after the central government rejected a referendum vote for independence in Catalonia as unconstitutional and dismissed the regional government.

Carlos Lesmes, the president of the Supreme Court in Madrid, said this morning about Mr Puigdemont’s absence: “When someone doesn’t appear after being cited by a judge to testify, in Spain or any other country, normally an arrest warrant is issued.” The Catalan President’s lawyer in Brussels insisted that his client will not return immediately to Spain. “The climate is not good, it is better to keep some distance,” said Paul Bekaert. He nonetheless added: “If they ask, he will cooperate with Spanish and Belgian justice.” 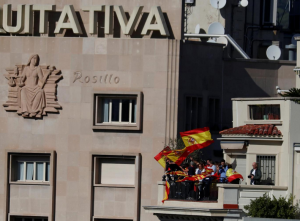 Supporters of independence held a rally in Barcelona chanting in support of Mr Puigdemont and his colleagues, vowing resistance to Madrid. Banners accused Mr Rajoy of being the successor to Mussolini, Hitler and Franco; others called for solidarity from Europe for Catalonia.

The move by the prosecuting authority for the extradition warrant and the jailing of the Catalan leaders were seen by some as vindication of Mr Puigdemont’s decision to remain in exile. Miquel Rovira, a 36-year-old architect, said: “This shows very clearly that they want to take our leaders from us and put them behind bars. It is an attempt to take away their voices before the December election and then to jail them for many years. These are Francoist tactics, they want to remove a generation of leadership from Catalonia.”

Artur Mas, a former Catalan President who had accompanied those facing charges to Madrid, pointed to his own experience to show what he considered to be the unfairness of the Spanish legal system. He had been banned from holding public office for two years by a court in 2014 after ignoring a ruling of the Constitutional Court and going ahead with a mock vote on Catalan independence. 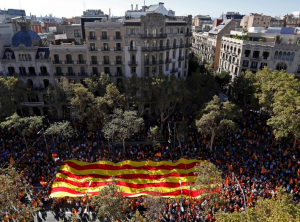 “If the question is whether you can trust the Spanish judiciary, my answer is no,” he said. “From my personal point of view, considering what happened to me, I don’t think that there are all the necessary guarantees to have a fair trial.”

But a lawyer for some of the accused complained that Mr Puigdemont’s action was harming his colleagues in the PDeCAT Party. The Catalan President was spotted in a café while the others appeared in court. “He is not here to answer questions. Not being at the service of the judiciary is always damaging for the rest of those being investigated,” said Javier Melero.

There were growing questions about Mr Puigdemont’s behaviour in Catalonia. The newspaper el Periodico ran a critical article under the headline “President, Enough is Enough”. There were also doubts among some at the rally in Barcelona, even as Mr Puigdemont’s name was being evoked by the crowd. Enrico Castells, a 30-year-old shop assistant, said: “It is odd that the others had gone to defend themselves in Madrid and he is in Belgium. I think there should be unity in this.”