Hundreds of thousands of people took to the streets of Venezuela on Saturday to mark 50 days of protests against the government of President Nicholas Maduro.
In Caracas alone, some 160,000 marched through the city, said Edinson Ferrer, a spokesman for the opposition, citing a preliminary estimate.
Protesters brandished placards that read “We are millions against the dictatorship” and “No more dictatorship”.
Many Venezuelans are furious with Maduro’s government, blaming it for soaring inflation, shortages of food and medicine, and a crackdown on human rights. They are demanding elections and autonomy for the opposition-led legislature.
Two-time presidential candidate and de facto opposition leader, Henrique Capriles, led the Caracas march.
“Fifty days and they’ve assassinated 50 people… Despite everything, on day 50, amid more repression, there is more resistance and more fight for Venezuela,” he said.
As with many of the previous marches, police firing tear gas broke up the demonstration and protesters responded by throwing rocks and Molotov cocktails. Many young men wore hoods and gas masks and carried makeshift shields of wood and metal.
One man was set on fire during the rally by people who accused him of stealing, the Reuters news agency said.
n the volatile border city of San Cristobal in Tachira state, more than 40,000 people took to the streets. Maduro had sent in 2,600 soldiers there after a week of mayhem that included looting.
“We don’t want more deaths. We want salaries that mean something, and medicines. The government invests more in bullets and weapons than in food and education for this country,” said Maria Diaz, a 33-year-old lawyer, standing in the torrential rain in front of security forces.
The turnout for Saturday’s demonstrations came close to the biggest rally during seven weeks of protests, when several hundred thousand people came out on April 19.
The demonstrations have degenerated into violence that has left 47 dead, hundreds injured, 2,200 detained and some 161 imprisoned by military tribunals.
On Thursday, the US imposed sanctions on the chief judge and seven other members of Venezuela’s Supreme Court and President Donald Trump described Venezuela’s humanitarian situation as “a disgrace to humanity.”
Maduro responded by telling Trump to stop meddling in Venezuela’s affairs. Russian President Vladimir Putin contacted Maduro via phone and said the Venezuelan people have the right to determine their own future without foreign interventions. 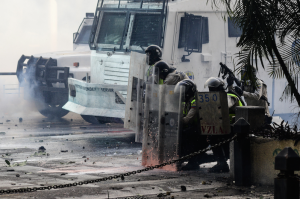 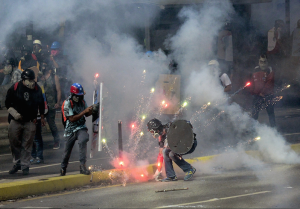 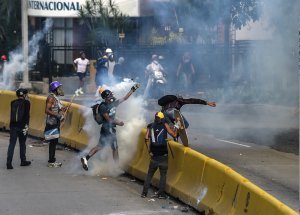 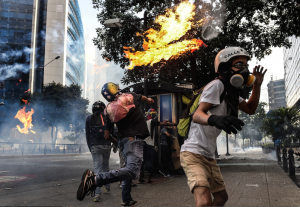 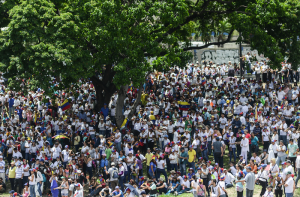