Who is Admiral Evangelos Apostolakis

The Chief of the Hellenic National Defence General Staff (HNDGS), Admiral Evangelos Apostolakis HN, will take over the position of the Minister of Defense, in the place of the resigned Panos Kammenos.

That was announced by the Prime Minister Alexis Tsipras. 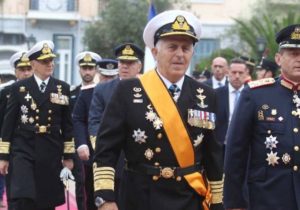 According to Panos Kammenos, Admiral Apostolakis will assume his duties on Tuesday afternoon.

In his statement, Mr. Tsipras announced that Mr. Kammenos’ position will be filled in by the Admiral as he does not want to put at risk the sensitive area of the Armed Forces with a gap in case someone unfamiliar with the current relevant issues of the Ministry of Defence was to be assigned. In this way, he wanted to send a clear message for the defence national sovereign.

Who is Admiral Apostolakis? 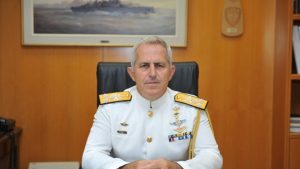 Admiral Evangelos Apostolakis HN, was born in Rethymnon Crete on May 14th, 1957. He joined the Hellenic Naval Academy in 1976 and was commissioned as Ensign of the Hellenic Navy in July 1980.

His sea duty assignments include various tours. He served mainly on Destroyers and Amphibious ships as Communication, Navigation and Operations Officer.

His shore and staff assignments include service as Deputy Commander and Commander of the Underwater Demolition Command, Adjutant of the Minister of National Defence, Director of Administration of Souda Naval Base, Chief of Staff of Senior Naval Command Aegean and Deputy Chief of Staff STRIKEFORNATO. 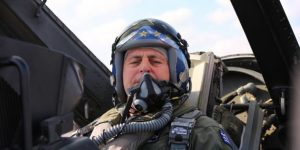 On March 7th 2013, he was appointed Chief of Hellenic Navy General Staff.

On September 15th 2015, upon the decision of the Governmental Council for Foreign Affairs and Defence, he assumed the duty of Chief of Hellenic National Defence General Staff and was promoted to Admiral.

He has been awarded with all the medals, decorations and commendations stipulated for an officer of his rank and seniority.

He is married and has two sons.