He met with Greek President Pavlopoulos and PM Mitsotakis in Athens

After meeting with the President of the Hellenic Republic at the Presidential Palace in Athens, the Chinese President Xi Jinping met with PM Kyriakos Mitsotakis at the Maximos Mansion Monday morning as part of his 2-day official visit to the Greek capital. 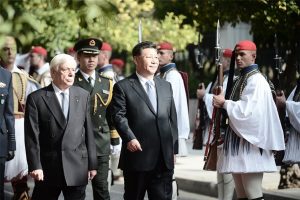 Upon being received by the Greek President after laying a wreath at the tomb of the unknown soldier, Xi Jinping highlighted the deepening of cooperation between China and Greece. 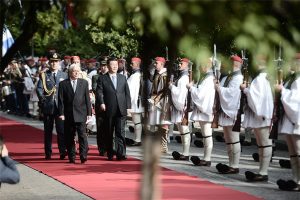 On his part, Prokopis Pavlopoulos pointed to the emergence of the new period in Greek-Chinese relations under the leadership of Xi Jing and characterised the visit of PM Mitsotakis to Shanghai as “very successful” “with Greece being one of the honoured countries with your contribution”. 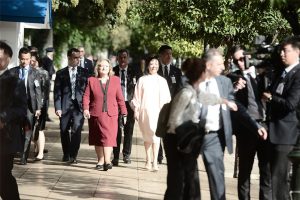 During the visit, a total of 16 bilateral trade agreements, including memorandums (MOU) and protocols on tourism, the port of Piraeus, culture, sports, telecommunications, etc are expected to be signed between the delegations of the two nations.

In addition, Mitsotakis referred to the 16 agreements that are to be signed during the visit and the talks that are to follow.

The president of China, who, after pointing to a 2.5 times increase in Greece’s trading volume, said that “China is committed to an economic opening and offers opportunities to all countries”.

Addressing Kyriakos Mitsotakis, he said that “under your leadership, the government has promised to boost the economy. We can all benefit from our cooperation.”