President Trump on Thursday suggested China, with whom he has attempted to form a close relationship, had been “caught red-handed”

South Korean officials told the Chosun Ilbo that the ships were allegedly trading in the West Sea between China and South Korea in a bid to bypass strict United Nations sanctions on oil exports to the pariah regime over its ongoing nuclear and weapons programme.

“We need to focus on the fact that the illicit trade started after a UN Security Council resolution in September drastically capped North Korea’s imports of refined petroleum products,” an unnamed source told the paper.

Under the current tough sanctions regime Pyongyang is only allowed 500,000 barrels of oil imports a year. North Korea last week denounced ever tightening economic sanctions as “an act of war.”

Ship-to-ship trade with North Korea on the high seas is also forbidden under UN rules but very hard to patrol without an aggressive Chinese crackdown on smuggling. 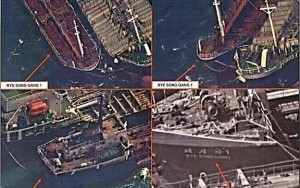 President Trump on Thursday suggested China, with whom he has attempted to form a close relationship, had been “caught red-handed”. In a tweet, he said: “Very disappointed that China is allowing oil to go into North Korea. There will never be a friendly solution to the North Korea problem if this continues to happen!”

Robert Kelly, professor of political science at South Korea’s Pusan National University, ventured that the reports were entirely plausible. “There is a lot of under-the-radar on the Chinese side. Beijing does not police the border strictly or enforce the sanctions toughly. This could be that,” he said.

Meanwhile, analysts were surprised by the latest Chinese customs data released on Tuesday, showing that, in a rare move, Beijing exported no oil products to North Korea in November.

It is unknown if China still sells crude oil to Pyongyang as Beijing has not disclosed its crude export data for several years.