UEFA announced that the footballer has been stabilized

In an unsuspecting moment of the Denmark-Finland match that was approaching the end of the first half, Christian Eriksen collapsed!

The experienced Dane tried to take control of the ball and seemed to stumble.

Seconds later teammates and opponents were asking like crazy from the medical team to come in.

And before his teammates make a circle to cover everything that happened, the viewers managed to see the efforts of the doctors to keep him alive.

Later on, a Reuters photographer’s report that “I saw Eriksen raise his hand on the stretcher” gave the first hopes after the initial shock

A little later, the photo with the ace of Inter appearing to be conscious circulated on the internet and the smiles grew. 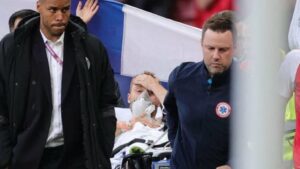 Eriksen is currently in hospital and reports say he has regained consciousness.

UEFA announced that the footballer has been stabilized.

Following the medical emergency involving Denmark’s player Christian Eriksen, a crisis meeting has taken place with both teams and match officials and further information will be communicated at 19:45 CET.

The player has been transferred to the hospital and has been stabilised.

Crisis of confidence: How Europeans see their place in the world