Anniversary of murder of Alexis Grigoropoulos

A group of hooded men caused bedlam in downtown Athens shortly before midday, as the student rally for the anniversary of the murder of Alexis Grigoropoulos was underway.

The masked-clad youngsters attacked a police vehicle at the Propylaea when they started to throw stones at police, with the latter eventually forced repelling them. The clash quickly escalated, as the attacking youth started hurling flares against the police, who in turn managed to push them back. Finally, a SWAT unit responded by using tear gas and flash bomb grenades against the rioters.
The clashes moved to Massalias street, where police forces used tear gas to prevent the riots from spreading to the central Akadimias avenue. The rioters used flares and lit fires on the Sina pedestrian zone.

The youth remained in the surrounding areas at Propylea breaking off shards of the pavement to use as “ammunition”. Current, the centre of Athens is inaccessible to citizens and vehicles, while anti—estabslishment group have scheduled to march in the centre at 6pm.

There will be 3,000 police officers on guard to prevent the outbreak of widespread riots in the areas in and around the Exarchia district and the Polytechnic building. Roads in the centre of Athens have been blocked off. 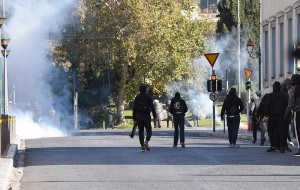 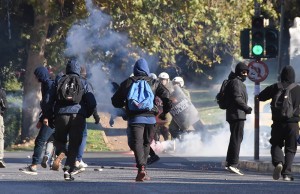