Claas Relotius, a journalist for the German magazine Der Spiegel and former CNN Journalist of the Year, was forced to resign after it was discovered he fabricated his stories “on a grand scale” for many years.

Relotius admitted to completely inventing over a dozen pieces by fictionalizing sources, characters, and quotes, following an internal investigation by the magazine.

“I am sick and I need to get help,” he reportedly told colleagues at Der Spiegel.

Relotius had previously been outed for writing an article that tried to portray a small town in Minnesota that supports President Trump as a bunch of racists.

CNN Journalist of the Year

Here he is accepting the CNN award for excellence in journalism. 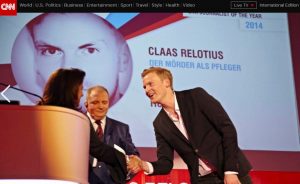 The German magazine has been virulently anti-Trump since he became President.

In 2017, they led rock legend Steven Patrick Morrissey by asking him “If there was a button here and if you pressed on it, Trump would die … would you push it or not?”