A student in Tennessee broke the Internet this week after posting a patriotic graduation photo.

The Southern bombshell, Brenna Spencer, posed for the picture wearing a red “Women for Trump” t-shirt while showing off a handgun in the waistband of her pants.

Lefties across the nation are not impressed.

The 22-year-old University of Tennessee at Chattanooga student posted a caption on her Twitter account alongside the photo reading, “I don’t take normal college graduation photos…”

The photo has been retweeted 12,000 times with more than 84,000 likes (as of press time). The picture is being celebrated by Second Amendment-lovers and derided by gun control activists.

“I did think that it would get a little attention, but not to this degree,” Spencer said in an interview with ABC. “It was really, really surprising to see the amount of hate that I got.” 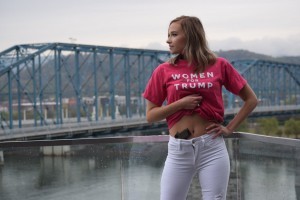 Spencer is a proud legal gun owner and has reported that she carries one of her several handguns “everywhere that I’m allowed to carry.”

Spencer maintains, “I know the Tennessee state gun codes,” and says she will continue to exercise her rights where it is legal.